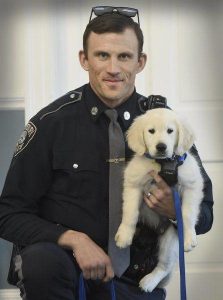 Members of the Police Department are champing at the bit to introduce their newest member, a 9-month-old therapy dog named Whit.

Patrolmen Scott Peters and Craig LeSage will be handling the golden retriever, who was named Whittier after local abolitionist era poet John Greenleaf Whittier, but most members of the department already have a nickname for him.

Peters met Whit about two weeks ago and the pair now live under the same roof.

“I’ve got three kids and it has been real tough for them,” Peters joked. “But he is a part of the family, absolutely.”

Peters said Whit’s objective is to help bring the Police Department closer to the community that it serves.

“We would like to think of him as an ambassador,” Peters said. “He will be a part of school assemblies and sports events. I am also the liaison with the Council on Aging and we would like to have him down there as well” and at the Housing Authority.

Peters admitted the coronavirus crisis has put a damper on Whit’s debut, but the dog is excited to get going once social distancing restrictions begin to ease.

“We want to get him into the schools right away, but we just can’t because of this strange time,” Peters said.

Whit came to the department courtesy of Nichols Goldens in Georgetown and will receive free therapy dog certification training from Seacoast Canine of Salisbury.

He said administrative assistant Janet Nicolaisen was the driving force behind Whit’s addition to the department. He will be the only therapy dog in Greater Newburyport.

Whit will receive free grooming from Scruffy to Fluffy Pet Spa in Bradford and free dog food from The Natural Dog in Newburyport, which is also offering 25% off for his supplies.

“Every time I walk him outside of the department, people are stopping, even the people in cars,” Peters said. “It’s a great thing.”