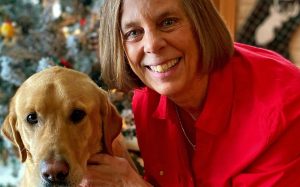 “My husband, Gregg, and I always had Labradors,” she said. “We’ve raised them for field trials in the past and for hunting. We picked Ace out of a litter from Bird Dog Labs in Bemidji in March of 2017. My husband passed away a year ago, so it’s just me and Ace at home now.

“I decided I wanted to do something with him so we could go visit people in nursing homes or hospitals. The thought first came when Gregg was getting blood transfusions and plasma. He didn’t ever get chemo, but I know people who had to sit through chemo. That’s where the idea to take Ace visiting came from after Gregg passed – to do something to cheer people up.

“People really respond to a dog. It’s just so cool to see. It’s an emotional support for them. It’s not me they want to see; it’s all about the dog.”

Bervig describes Ace as a very friendly dog who loves to retrieve and likes to hang out with her. “We love to go for walks,” she said. “And if I’m having a bad day he will come and put his paws on my lap like he knows something’s wrong. He’s sensitive. Labradors have that really kind demeanor.”

The therapy dog program was started 20 years ago by a group of 4-H members.

“They are not to be confused with service dogs,” Bervig said. “Service dogs are completely different. Besides going to visit people in assisted living centers, they can go to Boys and Girls Clubs, addiction and treatment centers, any number of places.”

Ace’s journey to becoming a therapy dog started in January.

“I got him the Good Canine Citizen certificate first through Paul Bunyan Dog Training Association in Bemidji,” she said. “There were 10 steps he needed to complete. A lot of it was obedience training to see if he would behave around other people.

“After we completed that training, they told me about the therapy dog training program. But with COVID at that time, they didn’t start the class until this fall. We had to be masked and social distance and follow all of the rules.”

The therapy dog training class met for six weeks starting in October. “They did a lot with equipment,” Bervig said. “We practiced having our dogs walk with us while we held onto an IV pole and taught them how to approach a wheelchair. With a dog Ace’s size, you have to train them to go up alongside a wheelchair or walker so people can pet them. As the handler, you have to put your foot in front of the wheel on a wheelchair so it doesn’t roll over your dog’s paws. And obviously you don’t want a dog that weighs 90 pounds getting up on somebody.

“We practiced a lot of practical tips. We each have a little backpack to bring on each visit with a bowl, a bottle of water, wipes for cleaning people’s hands after they pet your dog, stuff to clean up in case your dog has an accident. Also his certificates and proof of vaccinations.”

The training also involved desensitizing dogs to noise, such as someone dropping their cane. “We also taught the dogs the command ‘leave it’ for food or anything they might be attracted to on a visit,” she said.

The class concluded with a test on everything the duo had learned and his therapy dog certification.

As part of the class, therapy dogs and their owners visited Autumn Hills, an assisted living facility in Bemidji, in early November.

“A lady who works there was in the class and got special permission for us to go in,” she said. “It went fairly well, but all of the new smells in the nursing home and with all of the people eating in their rooms got a little chaotic at times. Normally, I would just go by myself with Ace and not a whole group of dogs at once.”

Bervig said the dog owners knocked on a door to see if the resident in the room wanted a visitor.

“Some people said, ‘no,’” she said. “Some loved Ace and others gravitated to the smaller dogs. It was a great experience, and I’m just hoping now that some places will open up to allowing visitors so I can start doing this here. Right now with COVID, I haven’t found any place in Park Rapids that will take him, so I’ll just have to be patient and wait.”

During this time Bervig said she plans to bring Ace to pet-friendly stores in Park Rapids. “ACE Hardware is one of them,” she said. “He’s got a bandana with his name on it that he wears. Whenever I put it on him I tell him we are going to work and he understands that means he’s got to be good.”

She said handlers watch their dog’s body language to know when they need a break during a visit.

“I took Ace outside for a water break when we were at the assisted living place,” she said. “His tongue was hanging out so I gave him some water and tried to calm him down a little bit because there was a lot going on inside.”

With 17 grandchildren, Bervig said Ace is also very comfortable being around children. “I take care of my granddaughter, Bekah, who is 1 year old, and she loves Ace,” she said.

Bervig has been retired since 2016. “Gregg and I had a financial advising business in the Northwoods Bank building,” she said. “We were in business for 35 years and raised our kids here.”

“My children are happy that I’ve found something that I like to do,” she said. “You know, it’s hard when you’re alone. I’ve always wanted to serve others, and this is a way to do that. Dogs are such social beings too, just like people.”

Bervig said she has already encouraged another widow who has a lap dog to consider a therapy dog program. “I told her it would be a good thing for both of them,” she said.

Any facility that wants to have Ace come and visit should contact her at bervig@unitelc.com.

“Studies have shown that people’s blood pressure drops when they are petting a dog,” she said. “They are not as stressed. Or if they are depressed, it brings them a bit of cheer. It’s a good program.”