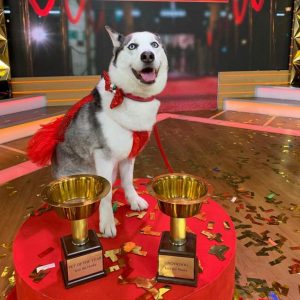 Glittering gold confetti fell from the ceiling as Izzy the husky wobbled up to a red podium to claim the nationwide title of “Pet of the Year.”

But Izzy seemed more excited to receive the prize: a wag-bag from BarkBox, which contained chew toys and treats.

Around 800 viewers submitted images and descriptions of their pets for the contest, according to Izzy’s handler, Melissa Foster. The contestants were then separated into categories such as “Most Instagr-animal,” “Most Tail-ented,” “Underdog” and “Odd Couple.”

Izzy’s competitors included other dogs, cats, a hedgehog, a goose and a miniature horse named Waffles.

For Foster, it was a surprise to even receive one award, but they left the competition with two.

The “Underdog” award was given to Izzy because she was born with hip dysplasia but still serves the community as a therapy dog, Foster said.

Hip dysplasia occurs when a dog’s hip ball and socket do not properly align, which can cause intense pain. Izzy does not walk like a normal dog, and when she runs, her two hind legs come together so she hops like a bunny, Foster said.

“I almost named her Bunny – half husky, half bunny,” Foster said.

Izzy won “Pet of the Year” for her service as a therapy dog with PAC at UCLA Health, according to “Good Morning America.”

Foster said Izzy’s disability might make her more compassionate toward sick people. It was one of the reasons that Foster made Izzy a therapy dog.

“Izzy is so sweet and loving, and she has the perfect temperament to provide love and healing to the patients at UCLA,” said Wahi, who introduced the pair to the program.

When Izzy and other therapy dogs enter the hospitals, their demeanors change, Foster said.

For example, when Foster puts Izzy’s therapy scarf on before Foster is ready to leave the house, Izzy will bark and act excited. She even recognizes the word “hospital,” Foster said.

“(The dogs) know they’re there to give comfort and love to the patients,” Foster said. “I fell in love with that myself, and I know (Izzy) enjoys it just as much.”

Seeing the happiness that Izzy brings to patients is what makes volunteering worth it, she said.

This was the first competition that 5-year-old Izzy and her handler have ever entered. Foster learned of the awards during the first week of October and applied on a whim. During mid-October, the producers reached out to Foster to announce that Izzy was in the running to be a finalist and to request more photos, she said.

Contestants didn’t know the results until the announcement on the show, and both Izzy and Foster were startled when the hosts announced: “Izzy the husky!”

“Good Morning America” referred to Izzy as “Izzy the husky” throughout the filming of the show. Now when Foster is around the house, she reminds Izzy of the competition by calling her the same, which she said makes Izzy happy.

Izzy also enjoys walking on the beach minutes from her house, chasing a squeaky tennis ball and eating carrots and cucumbers when she’s not providing therapy at the hospital.

“I’m looking to get her into any other contest or things, because she loves it, and I love it, and she’s a cutie,” Foster said.