Therapy dog works out after too many treats 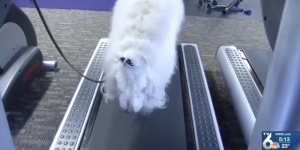 While many of us may have given up our New Year’s resolutions, one dog is sticking with hers! Bailey the therapy dog in Rock Island is using a “Fitbark” to lose some extra weight. Bailey is a 5-year-old labradoodle working to get healthy and lose half a pound per week, with a goal of losing 10 pounds.

Bailey’s weight gain started at church, where up to 8 people would give her treats each service. Cramer explained, “you get such a joy out of loving Bailey. Not only love physically as you hug her, but you can also treat her and it makes her happy. When you take her joy away, it was very sad. It was a very difficult time for me to tell our friends that you can’t treat her.” Those treats turned to Bailey getting overweight. “I think we follow the trend we see in America in general. People are overfeeding their dogs. It’s all kind of bad diets and things that people feed their pets and dogs get overweight because of that,” said Dr. Elizabeth Narske, from Rock Island Animal Hospital.

Dr. Narske explained it’s up to the owner to make sure the pet is healthy, “You control their food, diet, and exercise. Unlike a person where you make your own decisions, you make all of the decisions for your pets.”

Bailey uses a “Fitbark” similar to a “Fitbit” to track her daily progress and on the treadmill.

While she’s comfortable on the treadmill and hops on it on her own now, it took time for Bailey to get comfortable. “She didn’t know how to ride it. Somebody had to bait her and I had to straddle her and try to get her to stay,” said Cramer. Now, Cramer said Bailey enjoys being on the treadmill!

About 60% of the pets seen at the Rock Island Animal Hospital are overweight. Vets say three to four treats can be equivalent to about half a pack of Oreos. So diet and exercise are important for healthy pets!