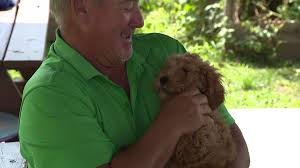 It’s impossible not to smile when you see 11-week-old Zoey.

She is training to be a therapy dog at Gate House, a homeless shelter near Danville.

Gate House Program Director Cindy Powers had the idea to bring a dog to the shelter when she saw two therapy dogs at nearby Danville State Hospital. She immediately knew they needed one here.

“Homelessness is such a trauma in people’s lives and I find that dogs can be very comforting,” Cindy Powers said.

Gate House has been in Montour County since 1997. It currently has 15 residents.

“We’re trying to get them jobs, help them get back on their feet, and transition them into their own apartment or house,” Tom Dougher said.

When people come to Gate House, they are at a low point in their lives.

“Bringing Zoey into play is an automatic feeling of comfortable, being safe,” Dougher said.

This miniature Goldendoodle has been here for three weeks.

Zoey can officially become a therapy dog when she turns one-year-old, but she’s already getting a lot of practice.

Powers says the children living at the shelter are especially happy to meet Zoey.

“We have meetings with them and you got to experience it today, the first thing that happens is Zoey has to go over and say hi.  They get to pick up the dog and give a cuddle,” Powers said.

It seems like Zoey likes being here just as much.