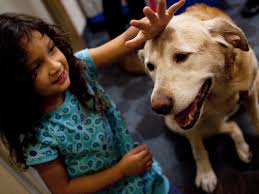 Emergency department doctors and nurses could ease stress for a few minutes with a therapy dog, a new study suggests.
The researchers made 122 emergency room doctors in a safety net hospital spend five minutes coloring, interacting with a therapy dog, or doing nothing. Low self-reported stress levels occurred only after sessions with a dog, they report in Academic Emergency Medicine.

“This study provides evidence that therapy dogs can reduce stress in emergency care providers,” said lead author Dr. Jeffrey Kline, Professor of Emergency Medicine at the Eskenazi Foundation at the Faculty of Medicine of Indiana University in Indianapolis.
“One of the most important findings is one that is difficult to put into a quantitative document,” said Klein. “And that’s how happy they were to interact with the dog.”

Participants recruited later in the study, when word of what it implied leaked, were disappointed if they ended up being randomized to the coloring arm, Klein said.

An earlier study showed that patients’ stress decreased significantly if they spent time with dogs, Klein said.
To see if the same effect would occur in physicians, Klein and his colleagues randomly assigned 83 emergency room doctors and nurses to spend five minutes with a certified therapy dog ​​and guide or five minutes to color. A convenience sample of 39 emergency room physicians enrolled in a control group that spent five minutes doing nothing.
The researchers did not do a three-way randomization to avoid a possible nocebo effect that could occur if participants expected something good and got nothing, Klein said.

Doctors were asked to report their stress at the beginning of their shift, 40 minutes after the intervention, and at the end of their shift. Stress measurements were captured with three different instruments: a visual analog scale (VAS), a modified 10-item perceived stress scale, and a FACES scale, along with a measurement of cortisol in saliva.
Interestingly, VAS measurements of stress increased in those who colored and decreased in those who spent time with a dog, while stress in the control group remained the same. MPSS scores increased similarly in the staining group, but decreased in the dog group. The control group saw an increase in the mPSS score.
Cortisol measurements in saliva showed a completely different pattern. Measurements were highest at the start of the shift for all three groups and decreased at approximately the same rate in all three. Klein said people may experience the greatest stress, due to anticipation, at the start of the shift, and that stress decreases throughout the day.
The results did not surprise Robert Miller, who coordinates the creative and expressive arts therapy program at UPMC Western Psychiatric Hospital.

Often, staff have bigger reactions to therapy dogs than patients and will talk about how they spent time with dogs, Miller said. “They have loved the staff-only pet therapy events we host,” he said.

“In areas of increased stress, a short intervention such as pet therapy could bring a bright spot to potentially intense change,” said Miller.

There is a clear need to find ways to help emergency responders de-stress, said Stewart Shankman, chief of psychology at Northwestern Feinberg School of Medicine. “It is essential that you do something to relax, whether it be coloring, meditation, or deep breathing,” he said. “What I liked about this study is that they tried to do a brief intervention for these health workers.”

Shankman points to another area that may need attention: sleep problems in front-line healthcare workers.