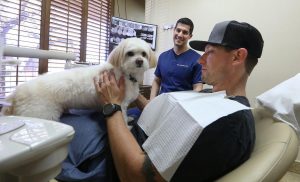 Hugo, a maltipoo, is afraid of just about everything except for humans. When someone visits Dr. Reza Moghbel’s office, Hugo is the first to greet them. When patients are getting a cleaning, a root canal or before surgery, Hugo is there to be pet and to relax them.

Nobody is excited to visit the dentist’s office.

The very thought of going to the dentist’s office can send just about anyone into a panic attack. There is an individual who has made it his mission to relieve some of the fear of a routine checkup.

“He’s the most popular in the office and I’m the least popular,” Moghbel said.

Hugo originally was an emotional support dog for Parisa Reyhanian, the business manager for Moghbel’s office, but gradually became a therapy dog for the office. His friendly demeanor is what makes him the ideal dog to help out during stressful scenarios.

“With the patient’s permission, Hugo will jump on their lap and so long as he is pet, he’ll stay for hours,” Reyhanian said. “Patients start to focus on him instead of the procedure.”