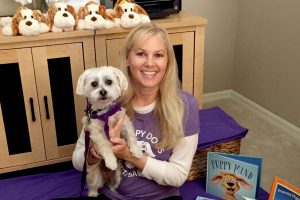 People are rapidly adjusting to life during the novel coronavirus pandemic.

Even therapy dogs and their handlers.

With libraries and schools closing their doors in an attempt to slow the spread of the COVID-19 pandemic, Therapy Dogs of Santa Barbara quickly found a way to make children’s storytime accessible virtually through their Facebook page.

Volunteers and their four-legged friends have been spreading cheer in the community since Karen Lee Stevens, a certified humane education specialist, founded the organization in 1997.

Therapy dogs and their human companions have stepped up and are holding reading sessions as Santa Barbara County and California remain under Gov. Gavin Newsom’s stay-at-home order in response to the novel corona virus.

“When this stay-at-home order happened, we decided that we would do virtual storytime for the kids,” Stevens said. “It’s a way for the community and us to still stay engaged with one another, even though we are not meeting face-to-face.”

Adults watching online are having fun too, Stevens said.

“They are participating either along with their kids or as adults watching the videos,” she said. “We want to bring happiness to the community.”

Therapy Dogs of Santa Barbara, formerly known as All For Animals, has a read-to-a-dog program called Animals + Reading = Fun! — or ARF!

For the past seven years, students would sit with a certified therapy dog and their human companion. Children read out loud to specially trained dogs, and the one-on-one reading sessions help kids improve their comprehension while having fun and cultivating reading habits.

The program has occurred at public libraries in Carpinteria and Santa Barbara, and other kid-friendly locations.

“We are all about the kids,” Stevens said. “Most of our work has been with children.”

The canines have visited local high school and college campuses to comfort stressed students during exam periods, and people have found warmth in therapy dogs making their rounds in assisted-living facilities.

While Therapy Dogs of Santa Barbara’s focus is primarily on serving children in the community, Stevens said, they also have volunteered in several other places and interacted with people of all ages who crave a tail-wagging good time.

“When the schools shut down, and we couldn’t meet with the children in person, we decided to do these online storytimes,” Stevens said. “Our volunteers are posting videos of themselves with their dogs and reading their favorite children’s books.”

The first virtual children’s storytime featured a volunteer and her dog named Molly, a Beagle mix.

Before reading Kelly DiPucchio’s Gaston, the purple-shirted volunteer offers a friendly hello and welcome to viewers.

The videos are all about making it personal, and the humans briefly talk about their dog’s background, age, interests, and what the canines enjoy doing in their free time.

“Hi, everybody,” Elizabeth Bowman, assistant professor and library director at Santa Barbara City College said in a video. “Molly is a pet therapy dog, though she’s in retirement now, and mostly she likes to sleep.

“We are going to read a book together, and don’t be surprised if she falls asleep,” Bowman continued. “We are happy to be here with you.”

All of the children light up when the video starts, and their smiles never stop.

Buffy, a 6-year-old chihuahua who was adopted from a shelter in Thousand Oaks, made an appearance in a video.

Cali Cupcake, a fluffy white Havanese wearing a pink bow between her ears, and Sandy, a 14-year-old Labrador retriever were other lovable therapy dogs in the videos.

A video shows Stevens and Sandy sitting together and reading Stevens’ published childrens’ book, Animals Have Feelings, Too!

The educational book takes children on a journey through the alphabet with Sandy, who shows young readers that people and animals share similar feelings.

“Her favorite thing in the world is to visit with children, so she’s still able to do that virtually,” Stevens said of Sandy.

Since the nonprofit dove into virtual storytime, the volunteers can reach new people and a wider audience beyond the Santa Barbara area, Stevens explained.

“It’s special because we can reach people across the world with our storytime, which is a nice feeling.”

Keep an eye out for Therapy Dogs of Santa Barbara’s Facebook page, because several more storytime videos are in the pipeline, and Stevens also is planning to implement videos focused on mindfulness.

“It has been well-received,” she said of online storytime. “I’ve seen many nice comments and likes on Facebook, and folks are saying their kids are enjoying it.”