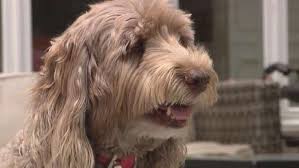 A global pandemic is not enough to keep Coogee the Australian labradoodle away from the seniors she loves to visit.

But the therapy dog has been relegated to snuffling at an iPad, while they blow kisses.

Coogee, and her owner Maureen Harvey, have been visiting the residents of Sunnybrook hospital’s Veterans Centre since last summer. At this point, she says some on L-Wing, where the average age is 97, think Coogee is their own dog.

“A dog brings joy to everybody,” Harvey told CBC Toronto.

“No one pets a dog and is angry after.”

Before, Coogee would parade through the ward, happily being pet. Sometimes, she’d gently rest her head on some of the frailest residents.

COVID-19 stopped those visits this March. That’s when Dr. David Williams, Ontario’s chief medical officer of health, issued a directive shutting down all outside access, including for therapy animals, as part of an effort to stop the novel coronavirus from getting into long-term care homes, where it can have devastating effects.

At the beginning of June, nearly 80 per cent of Canada’s COVID-19-linked deaths had been in long-term care homes.

Harvey and Sunnybrook’s Jennifer Ashby could see the shutdown coming, but it still hurt. Quickly, Ashby, a recreation therapist, found an iPad and within weeks the two women were holding virtual visits with Coogee to provide a ray of sunshine for the residents (thankfully, there have been no COVID-19 cases at the facility).

“It certainly is great to have a dog in the building,” one woman named Georgie says. Two men wave to Coogee, as Harvey waves the pup’s furry paw on the screen.

“You’ve made our day,” Harvey tells one woman.

“And mine,” the woman responds, with an ear-to-ear smile.

Ashby says Coogee’s weekly visits give residents a few key things: a dose of “unconditional love,” a sense of normalcy in a time when she’s often approaching them wearing a full face shield, and perhaps best of all, a chance to practice their social skills.

“My favourite moments are when a veteran’s having a bad day, and they see the dog, their face lights up… sorry,” Ashby says, brushing a tear away before it can reach the top of her face mask.

“You know you’ve made a moment, you’ve changed their day. You’ve made them happy when they weren’t happy.”

Canadian experts have backed up the idea that having access to a pet can be incredibly beneficial for people’s mental health, something that’s being taxed by COVID-19.

In recent years, therapy dogs have become a more common sight in Toronto.

St. John Ambulance has about 275 active dogs and handlers who normally volunteer everywhere from hospitals to retirement homes to classrooms to corporate offices (the last one is how the organization raises money.)

They’ve also been there on some of Toronto’s worst days: including those following the Yonge Street van attack and the Danforth Avenue mass shooting.

Now, due to COVID-19, almost none of those therapy dogs are working.

Just a handful have pivoted to video calls, said Christine Paradis, a Toronto-based branch advisor with St. John Ambulance and a volunteer herself.

It’s not that hospitals and long-term care homes don’t want video visits, it’s that they lack the staffing to do the calls. In the absence of visits, volunteers have been sending videos of their dogs, or even printing posters.

Finally, at the end of May, Paradis found a group of young caregivers who were up for an online meeting with her therapy spaniel-mix, Dexter. It’s not the same, she admits, as touch is such a huge part of therapy animal visits, but it seemed to delight everyone involved.

“Dexter loves to Zoom,” she said.

It could be the bowl of treats next to the monitor.