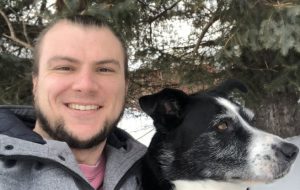 When Wesley Wierson’s border collie mutt, Layla, was diagnosed with cancer three years ago, the treatment would have involved having half her jaw removed and going through radiation.

Although later determined to be a misdiagnosis, Wierson’s experience shaped a desire to find a way to cure cancer while preserving a dog’s quality of life. With a doctorate in molecular, cellular and developmental biology from Iowa State University, Wierson had the expertise to start Leah Laboratories, a biotechnology company that aims to harness gene editing to cure canine lymphatic cancer.

“There exists no veterinary companies right now who are using gene editing to bring about a better life for their dogs,” Wierson said. “We really are excited about the opportunity to use our expertise in gene editing to actually be the next companion animal health care company.”

Since launching a WeFunder campaign in August, the two-year-old company has received almost $480,000 in investment funding from the site. In total, the company has received more than $1 million. With that money, Wierson said he plans to further research, development and technology application in order to start treating dogs by the end of the year.

“Now it’s time to actually start to build what we’ve been talking about, what we’ve been promising now for the last two years. So, it’s exciting, thrilling and, you know, obviously a little bit scary,” Wierson said.

“We realized that … we could bring the therapy that is a remarkable breakthrough in humans and be able to translate that to dogs,” he said.

Wierson and his team use gene editing, which reprograms immune cells to recognize and destroy cancerous cells in a process called CAR T-cell therapy.

Dogs are currently treated with chemotherapy and radiation if their owners can afford a tab that can run up to $10,000. The treatment requires repeated vet visits and may only prolong life for a short time. Wierson estimates that his therapy would cost around $5,000, require three vet visits and get rid of the cancerous cells.

Jaime Modiano, director of the University of Minnesota’s Animal Cancer Care and Research Program, cautioned that while many dogs could fully recover from this therapy, success depends on each dog’s case. Some could suffer relapses or face toxicity, he said.

“There’s a lot of excitement in the field and it’s great to have a company that has committed to making this a reality,” Modiano said. “The key is to temper our expectations.”

The total market for their product is estimated at $1.5 billion, Wierson said. Younger generations have given his company a positive outlook. Among U.S. millennials surveyed, 36% said they would be willing to spend between $1,000 and $9,999 for their pet, according to a 2018 survey by TD Ameritrade.

While simulations of the therapy have so far been attempted only in test tubes, it was effective in attacking the cancerous cells, Wierson said. The company must gain approval from the U.S. Department of Agriculture, rather than the Federal Drug Administration.