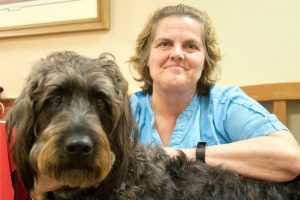 A loyal friend to everyone he meets, the labradoodle Brutus doesn’t act like his namesake.

For the past two years, Brutus has offered warm, fuzzy comfort at Bayhealth hospital campuses in Dover and Milford.

In June, Bayhealth honored him with a Spirit of Planetree Award, which recognizes caregivers, physicians and pet therapy animals who go above and beyond.

“Brutus and his owner, Sharon Conley, are a team in a true sense of the word. They mentor new pet therapy groups, cheer on veteran teams and ensure all they meet have a better day,” wrote Brutus’s nominator, Bayhealth volunteer manager Carrie Hart. “When the child care center requested pet therapy teams visit during the ‘Week of the Young Child,’ Sharon and Brutus were there spreading love and snuggles to more than 90 students.”

“Week of the Young Child” is sponsored by the National Association for the Education of Young Children and celebrates early learning. Conley, of Bowers Beach, said visiting the hospital daycare that week was a highlight for her and Brutus.

“They just really enjoyed snuggling up and petting and having fun with him,” she said.

Conley works in the volunteer office at Bayhealth, where the pet therapy program is managed.

“I see all the dogs and I thought ‘One of these days, that’s what I’m gonna do,’” she said. “It’s pretty exciting and rewarding.”

When asked how he felt about his award, Brutus said, “Woof. Woof woof.”