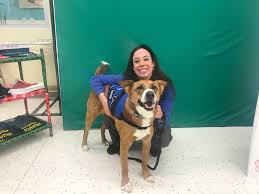 A sick patient at Hasbro Children’s Hospital is the one who came up with the idea to have a therapy dog on the team, according to Tara Brown, a nurse practitioner in pediatric palliative care there.

At the time there were volunteers who came in with therapy dogs, which was always well received. However when it came time to have difficult conversations, the dogs along with their volunteers would need to leave due to confidentiality. Having a dog as a member of the team would allow them to stick around longer and be there for the tough stuff, the patient suggested to Brown.

“I started out on a mission to see what the hospital would think of it, and finding a dog,” Brown said.

She put out a number of applications, and received a call from the Potter League for Animals. When she met 14-month-old Nemo there, she knew he was the one.

Brown adopted Nemo in June 2018. He went through therapy dog training and in May 2019 started going to work at Hasbro with Brown.

“Every day it’s a little bit different. Some days if a kid is having a hard time getting out of bed, we’ll do PT with him and say, ‘Hey do you want to take the dog for a walk?’ …There was a kid who was having trouble speaking, he lost his voice for multiple reasons, but he actually started to talk again by telling Nemo commands for tricks and stuff,” Brown said, adding that oftentimes he’ll simply cuddle up and take a nap with the kids.

There’s also an opportunity for siblings or other family members of a patient to feel Nemo’s comfort.

“We’ll walk in the garden with the siblings who need a break from the stress of the room. I don’t have to ask, ‘Do you want to go for a walk?’ I can say, ’Hey can you help me walk Nemo?” Brown said.

She said that he can read the room and see where he’s needed, looking to Brown for cues.

“We had a young boy who was terminally ill. He was sleepy, but when we walked in he opened his eyes and said ‘Nemo!’ Nemo laid in bed with him and they slept together. Each day he asked for Nemo, and Nemo would lay with him. On the day of his passing, I learned that this boy had fundraised for and wanted his Make-a-Wish to go to Potter League for Animals. Nemo came to say goodbye to his friend and his family. His mom said Nemo’s visits meant more than I could ever know.”

Brown thought it was a heartwarming story and wanted to share when she saw the call out from The Petco Foundation for adoption stories as part of its annual nationwide holiday wishes grant campaign.

As a result, The Foundation selected Potter League for Animals as a 2019 honorable mention recipient. The Potter League was honored for this recognition at Petco on Tuesday and presented with a giant check for $1,000.

“That $1,000 is going to come in handy definitely for treats and different toys for the animals, and the different one-on-one activities we do for the animals on a daily basis,” said Erin O’Gara Dollard, director of development for the Potter League.