Dogs will be speaking human words 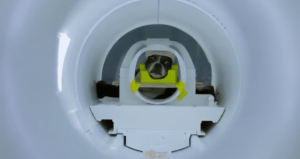 A popular dog website reported this week that dogs will be speaking in 25 years.

I heart dogs.com, which sells pet supplies and publishes a blog, made the bold assertion based on statements from MIT scientists.

Additionally, the article implied that some dogs in the MIT study were already talking, but it failed to produce any video to back that up.

My hope is that dogs are talking in 25 years — because I’m pretty sure that is when all honesty, accuracy and truth will have disappeared from human speech, if it hasn’t already.

Dogs could take over as journalists, website producers and politicians, possibly even infomercial salesman. And the world, with we humans no longer being misled, would become a better place.

Dogs wouldn’t be hell bent on amassing clicks — treats, maybe, but not clicks — and the amount of balderdash on the Internet would, one can only hope, subside.

“Have you ever wished your dog could talk? Of course, you have! Maybe you have already learned how to communicate with your dog. You can probably tell the different inflections in their cries or yelps, and you can hear different types of barks. But, what if dogs could actually talk? Like full-on communication with words.

“Here’s good news: Scientists say it’s possible. Scientists partnered with the MIT Department of Linguistics and veterinarians to complete a study on the subject. What they found is remarkable!”

(Some advice to dogs that are ready to start talking: Do it without the exclamation points.)

The article goes on to quote Patrick Elliott, postdoctoral associate at MIT: “Our double-blind study found that dogs who were exposed to 30 minutes of intensive speech and language therapy every day began developing human-like speech within eight months. When we compared dogs who received speech and language therapy to our control group, the dogs who received therapy developed syntax and semantics similar to 18-month-old humans.”

The study examined the dogs’ brains with periodic MRIs throughout their therapy. Imaging showed the dogs receiving therapy had significantly increased activity in their cerebral cortex and higher rates of blood flow in their medulla oblongata.

That didn’t lead to dogs saying, “Hey, buddy, go easy on that medulla oblongata,” but scientists said the evidence gathered is striking, and that dogs could be speaking full sentences by 2045, according to the article.

The scientists noted that some breeds responded better to the therapy than others, with Yorkshire terriers, golden retrievers, and Boston terriers among the highest achieving breeds.

“Many of these pups began speaking their first word around 6.5 months into speech and language therapy,” the story says.

Pugs disappointed the researchers. “Their attention to detail was lacking, to put it nicely. Beatlejuice was one of our participants who liked to wander out of the therapy room and into the kitchen down the hall,” said onsite animal behaviorist Haley Dougherty. “Pugs do not show promising results for any hope of brain development suitable for intelligible speech in the future. But they’re adorable, so there’s that.”

The article offered the following advice for getting your dog ahead of the learning curve when it comes to speaking:

“Set aside 30 minutes per day with no distractions. Speak to your dog directly. Speak slowly and clearly, much like when you’re trying to speak to someone with a language barrier. It’s the same concept,” said Elliott. “It also helps if you lower your voice. The participants seemed to respond better to male voices.”

The report quotes the study as saying 78.4% of the dogs “developed spontaneous speech” within the first year.

I can only conclude that scientists have a different definition of “developing spontaneous speech” than what might be commonly accepted. Either that, or they are hiding a bunch of talking dogs videos somewhere.