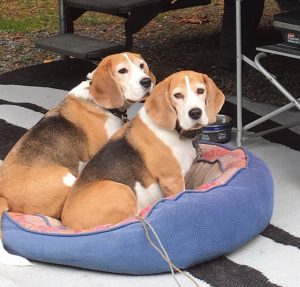 The owners of two beagles are warning people to keep an eye out for tainted meat, even on one’s own private property, following the deaths of both of their beloved family dogs earlier this month.

April and Rick Holitzki’s dogs, five-year-old Charger and six-year-old Bandit, had eaten meat injected with antifreeze which was tossed into their fenced Chilliwack property two weeks ago.

They have no idea who would do such a thing.

They have a good rapport with their neighbours, they’ve never had any complaints about the dogs, Charger and Bandit were friendly with children, plus they’d be let out in the backyard only when the Holitzkis were home.

And although beagles typically “bay” instead of bark (baying is in between howling and barking), the Holitzkis still used bark collars on the dogs when they’d bark at raccoons, squirrels and cats.

“We always thought we were managing the barking quite well,” she said.

So it came as a shock when they found out Charger and Bandit were poisoned.

It began two weeks ago when they noticed Charger was not well on the morning of Friday, April 3. He was lethargic, vomiting and had been let out into the fenced backyard to go pee several times the night before, which was unlike him.

They took him to Sardis Animal Hospital on April 3. The vet said his heart and lungs were good, and gave him some anti-vomit medication.

That night, Charger got worse. He lost control of his back end and had a hard time walking. The Holitzkis took him to an emergency clinic in Langley. He had a seizure on the way there.

At the emergency clinic, he was given some fluids, they did blood work and took X-rays which revealed Charger had fortunately not ingested a foreign object like a piece of plastic.

At 2 a.m. Saturday they got a phone call about his blood work.

“They said ‘he’s been poisoned. He’s got antifreeze in his system,’” April said.

She was in disbelief.

“That’s not possible,” she recalled telling the clinic. “He’s in our backyard. There’s no way. We don’t even have [antifreeze] here.”

Charger was euthanized that night at the emergency clinic.

If an animal ingests antifreeze, it needs medical attention within the first three hours – even though they won’t be showing any symptoms – otherwise it’s too late.

On Saturday morning, they thought if Charger was poisoned, maybe Bandit was too.

“They’re together all the time,” April said of the two purebred half-brothers.

Bandit was especially close with the Holitzkis’ daughter Larissa. He was a therapy dog and had been her companion after Larissa suffered a concussion.

Although Bandit was not showing any signs or symptoms, they took him to the vet anyway on Saturday to get blood work done as well.

“The same thing happened to Bandit on Saturday night, and we lost him on Sunday.”

Bandit’s blood work revealed he had also been poisoned.

In the meantime, on Saturday, the Holitzkis’ son-in-law Dillon Mabberley, began searching the backyard, a yard that is completely fenced with a locked gate. A wall of 10- to 12-foot tall cedar hedging butts up against the chainlink fence. He found a small piece of meat, about two centimetres by two centimetres in size. It was hard to tell what type of meat it was, but April put it into a bag and put it in the freezer.

The next morning, on Sunday, Bandit kept wanting to go to the same place in the backyard where that tiny piece of meat was found. They were stunned with what they saw.

“There was a whole bunch of fresh meat… put all along the fence line on our side,” April said.

It was cooked chicken, about a quarter pound of it cut into pieces and placed on the ground, in the hedge and on top of the fence. There was even a small amount on the other side of the fence in the yard next door where the neighbours also have a dog.

“It was sprinkled all around,” April said. “We were dumbfounded.”

When they had found the original single piece of meat Saturday, they though maybe someone was trying to poison wild animals seen in the area and maybe a raccoon had dragged the meat through their yard. But to see all of the other meat the next day was “unbelievable.”

“We never, ever would suspect anybody would do something so vicious,” April said.

They reported the incident to the SPCA and RCMP. Once the RCMP finished their investigation, April bagged up the chicken meat and, like the first time, put it in her freezer.

The next day she went to take it out of the freezer to bring to the vet so they could send it off to be tested.

“It had been in my freezer overnight, and when I took it out to take to the vet it was not frozen at all. Not even a little bit frozen.”

That indicated the meat contained antifreeze.

The only way to access the backyard is through a gate at the driveway running along the side of the house, but since there was no sign of activity from the security cameras, the Holitzkis figure whoever put the meat there got access through a neighbouring property.

They also realized a neighbour’s fence had been pushed in, and two newly planted shrubs were uprooted close to where the meat was.

They have since installed another camera in their backyard pointed in the location where the tainted meat was found.

Now, April says it’s too late for them to search for answers since Charger and Bandit are gone, but they are informing their neighbours of the tragedy.

The Holitzkis put up posters in their neighbourhood near Unsworth elementary informing people when and where Charger and Bandit were poisoned.

They have no plans of getting another pet any time soon since they now feel a dog would not be safe, even in their own private backyard.