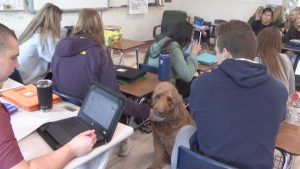 There’s a new staff member walking the halls of Kaukauna High School and the four legged friend is already having an impact on students and staff.

There’s no doubt about it, Chewbacca “Chewie” Brooks is the teacher’s pet at Kaukauna High School. While the 8 year old goldendoodle goes home with English teacher Betsy Brooks at night, while at school, Chewie is hard at work.

“Having him just in the room calms the atmosphere. I try to manage a very positive environment and Chewie just adds to that,” says Betsy Brooks.

Trained through the Fox Valley Humane Association, this is Chewie’s second gig as a therapy dog. He worked with Brooks at her previous job in another district. And just weeks ago started at Kaukauna High School. Three days a week Chewie joins Betsy Brooks at school and interacts with students as well as staff.

According to Brooks, “Outside of the classroom, before school or during lunch I have students that want to come in and just pet him and just hangout with him, so he helps them stay relaxed and calm.”