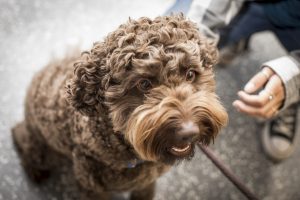 A 5-year-old Australian mini-Labradoodle, Kenny earned a pet therapy certification with owner Barbero two years ago through Pet Partners and started working regularly at the nursing school and the hospital in October 2018, including weekly sessions at UVA Eye Clinic. Barbero also usually brings Kenny to Grounds during times of heightened stress and activity – including during exams, preparation for the national nursing board exams (known as NCLEX), to reunions and special gatherings.

Now confined to home like the rest of us, Kenny sat on the couch that he’s allowed to sit on next to Barbero during the Zoom session, got a little restless but returned when Barbero enticed him with a treat.