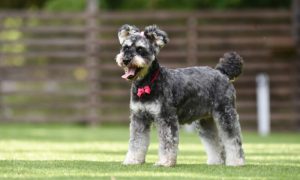 A man from California who credits his certified therapy dog, Lola, for saving his life a countless number of times has raised over $50,000 of his $45,000 goal to give her the surgery she needs to stay alive.

Dog owner Jason Garrett, from Bay area, created a GoFundMe page in December 2019 explaining that his 12-year-old mini-schnauzer had been diagnosed with mitral valve disease, which affects the heart and lungs and is common in dogs. Doctors gave Lola only 8–9 months to live.

“We had an episode in November where she came back from a walk and she fainted. She has an enlarged heart because she has a damaged mitral valve,” Garrett told Bay-area news station KGO-TV.

After her prognosis, Garrett did a lot of research and found that the only treatment for her condition was an experimental open-heart surgery pioneered by a Japanese animal cardiologist Dr. Masami Uechi that would add more years to Lola’s life. According to the American Animal Hospital Association, Dr. Uechi has performed this surgery over 700 times in 12 years, with a 90 percent success rate.

But for Garrett, coming up with the money, even if it meant cashing out his 401(K) or selling his car, was the least he could do for Lola, who had been by his side since she was 8 weeks old.

He said, “I’ve already cashed out my 401K and using every penny of my savings, and I’m also looking into selling my car if need be.”

In a YouTube video, Garrett explained that he had suffered from “severe depression and bipolar disorder my entire adult life.” He insists that without Lola’s company, he might not have made it through the darkest episodes of mental illness. “It’s not hyperbole to say the real reason that I continue to survive and thrive with this disease is—yes, you guessed it, Lola!” he further added.

The elevated cost of the surgery is due to the sheer number of people involved in the procedure, which, according to the non-profit Mighty Hearts Project, which helps to provide hope, education, advocacy, and support to owners of dogs with mitral valve disease, “requires 2 surgeons (surgeon and one assistant surgeon), 3 sterile instrumentalists, 3 non-sterile assistants, 1 perfusionist, 1 anesthetist-resuscitator, and 1 cardiologist sonographer.”

In addition, Mighty Hearts Project states that “the success of this intervention is due to the perfect harmony of a team that is perfectly in sync together where everyone has his or her designed roles, no technical details are left to chance.”

Garrett’s moving story about Lola’s importance in his life seems to have helped his GoFundMe campaign achieve incredible success. Over 1,600 donors have joined together to date to contribute $50,000 toward her surgery, exceeding the campaign’s goal by more than $5,000.

In a video update, Garrett thanked all the donors for their contributions, noting that many “were in honor or in memory of your own loved ones, people and pets.” Calling himself “humbled” by the incredible response, Garrett told donors that they had “really saved two lives,” not just one.

Garrett has since created an Instagram account for Lola, so people can get to know her better and follow her progress with the surgery that has been scheduled for some time in summer 2020.

For Garrett, he said he would do “anything for Lola,” adding, “She’s family.”