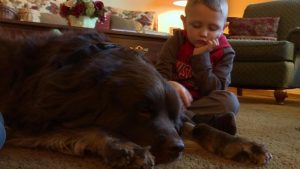 A familiar face for students at Morley Elementary is recovering from a major surgery on Friday. Bear, the school’s therapy dog, tore his ACL and can’t get back to work until he’s all healed up.

Bear, a three year old Newfoundland, is a busy dog.

“He goes to school with me at Morley, five days a week,” said Theresa Reinhard, Bear’s owner. “He also works some evenings, he does visits at some retirement homes, and he makes visits to the correctional centers as well. And on Sundays once a month he also visits the pediatric ward at Bryan Health.”

Since Fall of 2018, he’s been a constant presence for kids at Morley Elementary.

“It helps everybody calm down, like if you’re nervous for a test, he’s just a really calming presence,” said Simon Morehead, former student.

Bear is one of a few therapy dogs in Lincoln Public Schools. Students said having Bear in the classroom provides a calming presence and helps them focus.

“Just knowing he’s there to comfort you, it provides relief,” said Malachi Tinsley, a 4th grader. “You know there’s a dog, there’s a furball, and it’s all going to be okay.”

“There are just so many things children will share with a dog that they don’t normally share with people, or the presence of a dog will kind of help them let down their guard,” said Julie Metteer, a first grade teacher.

A few weeks ago, Reinhard said she noticed Bear was limping.

“We thought maybe he’d pulled a muscle, like humans do,” Reinhard said. “We let it go a few weeks because we thought it will get better if he rests. But it didn’t get better.”

It turns out Bear had torn his ACL.

With a big dog, there are big costs. Bear’s surgery will cost nearly $5,000, so Julie Metteeer started a GoFundMe page to help pay for some of his expenses.

Reinhart said Bear’s recovery is expected to take between eight to twelve weeks to be complete. But, as soon as he can, Bear will be back in the classroom.