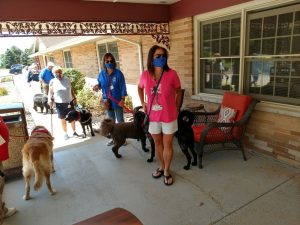 Of all who have been affected by the COVID-19 pandemic, residents of nursing facilities and their families have perhaps suffered the most. Not only in terms of the threat of the virus itself, but the social isolation wrought by it.

This made the general cuteness of a “pooch parade,” organized by Hospice of the Western Reserve and held last Thursday (June 25) at Willowood Care Center in Brunswick, all the more touching.

Many of the therapy dogs have been regular visitors at Willowood over the years.

“He knows certain people — he runs down the hall and into their rooms before I get there,” laughed volunteer Katie Garra of the regular 10-minute visits with Willowood residents made by her therapy dog, 7-year-old golden retriever Cody.

“We have been doing this for four years. When we started, this was the first place we came.”

Cody was joined by four other therapy dogs, which are among the nearly 40 across the Hospice of the Western Reserve system and more than 25 at the Hospice of Medina County program.

Jeff Stanicki, vice president of marketing and provider relations for Hospice of the Western Reserve, said the idea for the parade came from the pet therapy volunteers themselves.

The event, with the therapy dogs marching around the perimeter of the nursing home for residents to enjoy through their windows, was meant to simply brighten the day for Hospice of Medina County patients and other nursing home residents, while supporting community partners and those providing care at Willowood during these challenging times, Stanicki said.

“The therapy dogs come to Willowood every week, and it has become a big part of the hospice experience for patients,” he said. “They get to know the dogs, and (the visits have) not been possible due to social distancing.”

The therapy dogs were still unable to visit with the nearly 100 Willowood residents as closely as they normally would have. But the reaction from both residents and dogs was equally joyful when the parade came into view.

“It provides such comfort,” said Hospice of the Western Reserve Provider Relations Manager Catherine Rohr. “It lowers blood pressure, reduces stress and anxiety, and has an instant calming effect.”

According to volunteer Debbie Liebler, who volunteers at Medina Hospital with her 4-year-old Labradoodle, Brady, that feeling is most certainly mutual for the therapy dogs. “I’ve been wanting to get out of the house, and this is something that makes the residents happy,” Liebler said. “And Brady really enjoys it, too. He’s been spending most of his summer swimming.”