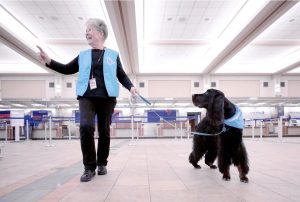 Pamela Prestegard and her therapy dog, Rocky, seek to soothe travelers at Dane County Regional Airport. The airport’s therapy dog program has been in place since 2015 and currently has some 10 dogs.

With their lines, security checkpoints and waiting — oh so much waiting — airports are not a place most people visit unless they absolutely have to.

Which is exactly why Pam Prestegard visits the Dane County Regional Airport when she doesn’t absolutely have to.

Prestegard is the proud owner of Rocky, a Gordon Setter and one of 10 trained therapy dogs who volunteer their and their owners’ time at the airport in an attempt to make air travel in and out of Madison a little more pleasant.

Prestegard sings the praises of the program that began in 2010 with one dog. And as long as there are plenty of treats — bits of carrot and apple, specifically — and people to pet and praise him, Rocky, 9, doesn’t seem to mind it either.

Prestegard, 72, came to Madison to go to school in 1965 and never left. She is recently retired from the insurance industry and before that taught high school English. Two of her four grown children still live in Madison.

A local therapy dog group — their coordinator literally ran into us in the dog park one February day about five or six years ago. And I could see this lady watching Rocky, and I thought, “Well, what’s wrong?” And she came over and greeted me and kind of watched Rocky and watched how he interacted with the other dogs and the people. And she said, “Have you ever considered doing therapy dog work?” She said, “I can see that he is very good greeting other dogs. He’s good greeting people.” And she recruited us right out of the dog park.

Therapy dogs have to be at least a year old to even be considered and they have to have the proper temperament. A very wild, yappy dog or a really aggressive dog obviously would not be good candidates. Then they have to have some obedience training. Then they have to go through a pet therapy course training, both of which are offered by many kennel clubs, including Badger Kennel Club here, which is where I took him. And after that there is a process by which you have to be certified as a team, handler and dog, by one of the therapy dog certifying organizations in the United States. There are some in this area, and we went through Alliance of Therapy Dogs.

The main focus is getting the dog used to a variety of environments. They bring in medical equipment — wheelchairs, walkers. They want the dogs to be familiar with that and not panic or bolt. They will take you out of class sometimes and bring you into other environments to just get them used to doing different things and being in touch with a variety of people. There are rules about how far apart different therapy dogs can be from each other during a group session.