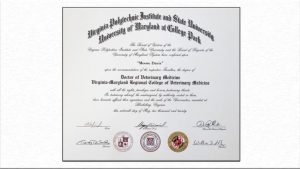 His years of service to students are being celebrated with an honorary degree from the Virginia-Maryland College of Veterinary Medicine, which is operated by Virginia Tech and the University of Maryland at College Park.

Moose was granted the degree at a virtual commencement ceremony on Friday as reported by Huffington Post.

Moose has helped out in counseling sessions with thousands of students, his owner, Trent Davis who is a licensed counselor explained that therapy dogs chiefly aid in sessions by providing extra comfort and a sense of security. In his words:

Dogs provide a source of comfort and grounding. For a lot of humans, unfortunately, other humans haven’t always been the best to them in their lives, so dogs can be a little bit safer.

In February, Moose was diagnosed with prostate cancer and has been undergoing treatment managed by the College of Veterinary Medicine, according to a Virginia Tech press release.

However, he is doing well and has since returned to work with fellow therapy dogs Derek, Carson, and Wagner.

Outside of this therapy career, Moose loves swimming, playing tug-of-war, and eating. He was also honored as the Virginia Veterinary Medical Association’s “animal hero” of 2019.

Moose was raised at New York’s Guiding Eyes for the Blind, but a minor medical condition prevented him from becoming a guide dog. He was then adopted by Davis and ultimately became a therapy dog.