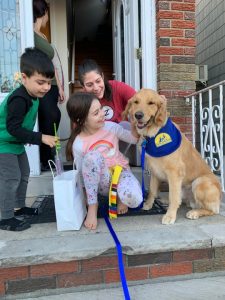 These are difficult, anxious times for families holed up with small children. Ladd is here to help.

The service dog normally does his calming and comforting at North Arlington’s Zentai Martial Arts studio. But these days, Allen DePeña, owner and operator of Zentai Martial Arts, has been taking him around to his younger students’ homes to deliver bags full of slime and coloring pages and crayons.

“My idea was for him to go around to the kids and brighten up their days,” DePeña said. “I’ve had lots of conversations with families who are struggling, who have lost jobs or members of their family.”

DePeña has Ladd (formally known as Ladd III) sit on the doorstep while he remains farther back, adhering to social distancing rules. DePeña said he originally was just going to drop the bags on porches but thought a familiar furry face would lift kids’ spirits more.

DePeña said he received numerous messages from parents after he and Ladd dropped off the goodie bags. Parents told him that seeing Ladd put smiles on their faces and lifted their children’s moods.

“It’s very emotional, it’s very touching to see the level of impact he’s having on the families,” DePeña said.

Not only does Ladd bring treats for kids who can no longer attend martial arts classes at the studio, but he also helps the children at Zentai’s child care. Zentai has been licensed as a child care center for two years. DePeña said that they are operating at 15% to 20% capacity because of social distancing. His wife, Naomy, a retired special needs teacher, is caring for at least 15 children. DePeña said they are the children of essential workers.

The DePeñas got Ladd on Valentine’s Day after a long application process that began two years ago. They were finally invited to a two-week training at Canine Companion for Independence’s campus and trained to work with Ladd.

“It could not have happened at a better time to have him be part of the community,” DePeña said. “Just because of everything going on right now and him being there for these kids.”

The DePeñas are also using Zoom, a video conferencing app, to provide free martial arts classes for children and bedtime stories. DePeña’s son helps out by teaching breathing and stretching techniques in the morning before school.

DePeña said it’s “amazing” to see the children interact during the virtual classes and that it has helped some shy children come out of their shells.

“Right now, one of our main concerns is keeping [children] physically active to help them not get too anxious or into a depressed state of mind,” DePeña said. “It can easily happen with all this cabin fever.”