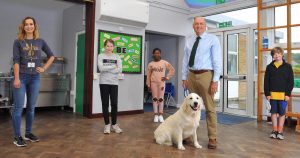 Children at Beechview Academy primary school in multicultural High Wycombe, Buckinghamshire, are exactly the kind Boris Johnson’s £1bn “summer catch-up” plan is aimed at. The Prime Minister’s scheme is designed to help under-privileged children whose education has suffered most during the lockdown, amid widespread concerns that the attainment gap between children from poorer and better-off families is becoming wider than ever.

Few headteachers are better placed than Beechview’s Dr Peter Holding to observe what he calls “the extreme ends of the Covid spectrum”. Nearly half of Beechview’s 208 pupils receive free school meals, 30 per cent speak English as a second language and 25 per cent are classed as having special educational needs and disability (Send). Dr Holding, 66, took over the school in 2018 after it was marked as failing by Ofsted inspectors. Although only six miles away from his previous headship at Sir William Borlase Grammar School in Marlow, on the banks of the Thames, it is worlds apart. Borlase sends a regular stream of students to Oxford and Cambridge universities, has produced several international rowers and only a handful of its pupils receive free school meals. While Beechview’s curriculum was thrown into chaos when schools closed in March, at high-achieving schools such as Borlase lessons carried on as normal – online. Almost all pupils have computers. Some have performed even better owing to the lack of the usual school distractions.

Right now he is desperate to turn the trickle of 20 Year 6 children who have returned in the past fortnight into a flood.

“We have children from the most disadvantaged backgrounds,” Dr Holding tells i. “Some struggle with home learning but it often isn’t their fault. Some homes have no computer or even internet access. One family did not know how to log on. We sent someone round to show them but they couldn’t do it the next day. “You might have six children with just one computer and a parent who needs to use it for work. We have some very talented children and supportive parents. But in general they have fewer books, more social difficulties and a higher percentage are unemployed. Take all of that and you are creating a pressure cooker for what already existed.”

Dr Holding agrees with Prince Charles’s recent warning about the “devastating” effect of coronavirus on a generation of young people. “It is potentially catastrophic,” he says. “Some will have had very little disruption because of their schools or background. Others have done virtually no learning.”

He is also frustrated by confusion over whether the two-metre social distancing gap is to be kept, halved or scrapped. “I am trying to plan for September, but am I expected to come up with 17 plans for 17 different scenarios?” he sighs. Dr Holding has not been idle during the lockdown. He shopped at Aldi to provide square meals for pupils with hard-up parents. Meanwhile, the school has been repainted, with a giant NHS rainbow in the hall providing a permanent and uplifting reminder of the pandemic.

He is, however, sceptical about moves to deploy a “dad’s army” of retired teachers at “summer camps” in community centres.

“Primary school children would be anxious to be in a strange setting with a stranger for a short period,” he says, arguing that it is more practical – and cheaper – in the long term to use sixth-form students from neighbouring schools. He has already shown that it works. Students from Borlase and nearby Wycombe Abbey School, one of the UK’s leading independent schools, have helped Beechview pupils with English and maths in recent years.

Dr Holding’s staff agree it’s important for children to be back in classrooms. In a break from her sparse Year 6 class, Beechview teacher Tegan Rego says: “The children definitely missed stuff at home during lockdown. You can’t be sure they have done the work they are supposed to.

“Now they’re back it’s easier for them to ask questions, and easier for me being in front of them. They pretend they don’t like being back – but they do really!”