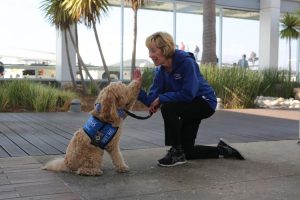 A voice on an intercom announces pre-boarding at Gate 1 at Long Beach Airport. The nervous energy of several dozen travelers is palpable as they scramble toward the gate.

Yet a small congregation has gathered away from the haphazard line being formed. Six sets of hands stretch out to meet the new local celebrities. It’s Bella, a 3-year-old labradoodle representing the airport’s new therapy dog program STARS, and she’s clearly happy to receive the attention of several families at once.

The STARS program, short for Simple Therapy and Real Smiles, officially launched on Nov. 1. Aimed at reducing travel stress, the city has launched its therapy dog program with nine dogs. They and their handlers roam the airport concourse at targeted times throughout the week.

“Long Beach Airport is really excited about this program,” Kate Kuykendall, Long Beach Airport public affairs officer, said. “We feel like we have our own special brand and reputation for being a really laid-back experience, and so this is just one more way to make the experience better.”

The idea came over a year ago, when Phil Ramsdale, once of the Airport Advisory Commission, struck up a conversation with friend and neighbor Jan Hextell. Hextell had recently gotten Bella.

“I thought it was time to give back, and Bella was such a great companion that I wanted to share her,” Hextell said.

Airport officials agreed to a pilot program, with Hextell and Bella demonstrating the calming effects a therapy dog may have on anxious travelers. From there, the program grew dog by dog.

“We already had a volunteer program, so we created an offshoot for the handlers for therapy dogs,” Kimberly McMahon, airport public affairs assistant, said. “They go through the same process the other volunteer applicants do, with background checks by both the airport and the city. Once all that is clear, and the dog’s insurance is cleared, they can go out and begin working.”

Currently there are nine dogs with the program, of all shapes and sizes. These include Rudi, a chihuahua-terrier mix, beagles Hope and Harmony, and even a big, burly German Shepherd named Zuba.

Therapy dog certification can be done through a number of organizations. Most of the dogs with STARS are certified by GO TEAM, a nonprofit based out of Colorado. In Hextell’s case, Bella was first trained by Sit Means Sit, a dog training company that sponsors GO TEAM.

“If I was going to have a dog, I knew I wanted it to be a good dog,” she said. ‘So we investigated training programs, and found the program ‘Sit Means Sit.’ Bella went away to school for a week and came home with basic skills. Then the trainers trained us, and we needed to follow through and stay with the program.”

Therapy dogs are different from service animals and police K-9 units in that they’re meant to be pet, hugged, and played with by groups such as anxious travelers, stressed out college students, and senior citizens. The dogs with STARS wear bright blue vests that clearly show their names as well as the words “pet me.”

STARS is still in its infancy, and given the volunteer nature of the program, there’s no guarantee dogs will be at the airport at a particular time.

“We don’t require any certain number of hours worked a week or anything like that, and most of our volunteers are working other jobs,” McMahon, who oversees the airport’s volunteer program, said. “The volunteers are careful about checking the flight schedules, because there are times here when it’s a little too slow to justify having them here.”

McMahon added that Mondays are the most likely day to encounter a dog, and that there is now a waiting list of dogs if STARS expands.

The therapy dogs instantly command attention when they stroll into the concourse. Handlers like Hextell are trained to answer the basic gamut of terminal questions, like where the restrooms and particular restaurants are.

“They mainly hear things like, ‘you’ve made my day,’ which alone validates that they’re here for a good reason,” McMahon said.

After distributing trading cards bearing Bella’s name, breed, age and fun facts to a group of excited children, Hextell spurs her dog on.