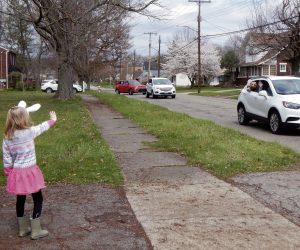 Go Team Therapy Dogs — used to spending time with people in nursing homes, children services agencies, mental health facilities and libraries — has had more than a month of inactivity since the coronavirus outbreak.

Wanting to bring cheer for the holiday weekend to friends and families, Go Team handlers and the dogs gathered Sunday afternoon and traveled through parts of Trumbull and Mahoning counties honking horns and waving to people.

Marsha Scott of Niles, president of Go Team Therapy Dogs, said she and other dog handlers got into their decorated cars and made a parade of more than 10 vehicles to travel into neighborhoods to see children.

“We all stayed in our cars and rolled down the windows so the children can see the dogs. We wanted to do this for the kids so they could see the dogs again. They love the dogs,” Scott said. “The handlers are also glad to be able to get out with the dogs like this — everyone has been locked up for so long. This is a good way to do it and keep social distancing.”

She said the Go Team Therapy Dogs are brought to different places to provide comfort and therapy to adults and children.

Scott said they drove by neighborhoods in Niles, Mineral Ridge and Youngstown, where members of the team have small children.

“This makes us feel good that we can go out and do something special for people who have been in their homes,” Scott said.

She said handlers could decorate their cars and dress up their dogs and themselves for Easter.

Lisa Inhouse of Austintown was in a car with her dog, Rennie, a shih-tzu Bishon mix.

“These dogs are used to visiting people all over the place and have quite a social life. They have been cooped up like everyone else. They get to share some love with others,” she said.

Inhouse said she thought it was a great idea and wanted to be part of it.

“It has been such a long time since the dogs have been out, and since even our group being together,” she said.

Rita McIntosh of North Jackson said treat bags were thrown from the car windows to children on sidewalks.

“The dogs like to get out so this is a way we can safely do this,” she said.

Melissa Simko of Sit Means Sit and the Go Team Therapy Dogs said the families in neighborhoods were notified they would be driving by.

“The children love seeing the dogs. They haven’t seen them in awhile,” she said.

Katie Svasta of Canfield brought her 11-week old puppy Shane, a collie breed, to the event. The dog is too young to be team member but will be training in a few months.

Shane rode in the front passenger seat on Svasta’s lap.

“We wanted him to brighten up everyone’s day. Children love to see a puppy,” she said.

Niles resident Ashley Hafely was standing with her daughters Zoe and Brennan Martin, at their Summit Street home watching as the parade of cars went by.

Go Team Therapy Dogs have been inactive since mid March due to COVID-19. The dogs are also trained for crisis events and work with the American Red Cross, airports and veterans and take part in community events attended by many people.

Inhouse said Go Team Therapy Dogs was created in 2012 during the Waldo Canyon fire near Colorado Springs where two therapy dogs and their handlers visited displaced residents in hotels and evacuation centers and also spent time with first responders.