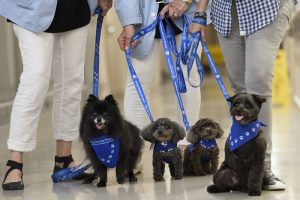 Wagging tails. Wet noses. Soft, warm bellies. It’s not surprising that getting a visit from a therapy dog while receiving cancer treatment boosts the spirits. But these visitors do more than put smiles on the faces of people with cancer — they may actually help some people heal.

“Getting up and moving around after surgery is important to the recovery process, but it’s hard for many people to do,” says Jane Kopelman, who runs the Caring Canines therapy dog program at Memorial Sloan Kettering. Sometimes all it takes is a nudge from a four-legged friend. “I see patients who are willing to get out of bed, and even take a walk down the hallway, just so they can spend more time with one of the dogs,” she says.

Over the past 12 years, MSK’s Caring Canines have become a fixture in almost every area of patient care. The program started on a single floor with seven dogs. Now, about 50 therapy dogs and their handlers, who are all volunteers, make the rounds throughout MSK. Both handlers and pups sport identification badges so that passersby know that they are the real deal.

Ms. Kopelman and her mixed-breed dog, Wally, were one of the first volunteer pairs to come to MSK when the Caring Canines program launched in 2007. She quickly realized she wanted to get more involved, and she officially became the Caring Canines consultant in 2014. “It was clear that the program was going to grow a lot, and they needed someone to safely run it,” she says.

Safety is important, especially because many people being treated for cancer have compromised immune systems. Therapy dogs need a host of vaccines and frequent health screenings. They also get bathed and groomed right before visiting MSK. To make sure they don’t tire out, there are limits on how many hours the dogs can work in each shift.

In addition to their work as cheer bringers, some of MSK’s Caring Canines have taken part in published research. This got them one step closer to earning their white lab coats — and maybe eventually, their PhD(og)s.

In April 2018, a team led by Pamela Ginex, who was then a nurse researcher at MSK, published a study in the Clinical Journal of Oncology Nursing (CJON) that looked at the benefits of therapy dogs for people recovering from surgery on the 15th floor of Memorial Hospital. At the time, Caring Canines were not yet visiting this floor. People who’d had surgery, as well as their family members and the nursing staff, completed questionnaires on their levels of stress and sense of well-being before and after the visits. This was the first-ever published study to also look at whether therapy dogs can improve job satisfaction for hospital staff in an inpatient setting.

It takes a rare breed to make it through the rigorous training process that qualifies a dog to work in a medical setting. Not literally, though. Ms. Kopelman says that any dog is capable of becoming a therapy dog, from the tiniest Chihuahua to some really big woofers. The traits required are more about an individual dog’s personality and temperament. “You need a dog that can roll with anything,” she says. “You don’t want them to get flustered and start barking.”

Their handlers also need to complete rigorous training. They are sometimes brought into situations that are emotionally difficult, such as visiting people who are receiving intensive care or those who are at the end of life. “The dog handlers are a vital part of the team,” Ms. Kopelman says.

“Currently, the demand for therapy dogs is much higher than the supply,” Ms. Kopelman concludes. “We would love to have more dogs and volunteers. The most common thing we hear from patients when we arrive at their bedside with a dog is ‘I’ve been waiting all day for this visit.’ ”