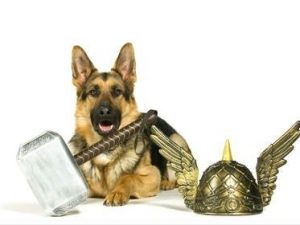 Thor, a two-year-old German Shepherd from Lake Hiawatha, is one of a dozen finalists for radio station WDHA’s annual “Ultimate Rock Dog” contest.

As a finalist, Thor is guaranteed a spot in the station’s 2021 calendar. But the winner will be featured on the cover, in addition to getting major bragging rights that come with the title “Ultimate Rock Dog.”

“I am extremely happy that Seeing Eye allowed me to adopt him,” said Thor’s owner, Lisa Klink of Lake Hiawatha.

Thor came to Klink as a seven-week-old. Initially, she was going to raise and socialize him so he could function at Seeing Eye. But last February, he returned to Klink after a few months and embarked on a new path.

“Shortly after,” Klink said, “Thor passed the test to become a Bright and Beautiful Therapy dog.” Thor even helped with Klink’s graduate thesis at Rowan University.

“I was able to successfully demonstrate the use of pet therapy to reduce anxiety in students in the classroom as I taught,” Klink said.

Thor had lots of practice. When he was a puppy, he visited Klink’s middle school science class. He provided pet therapy for the students as well as socialization with all age groups. The German Shepherd now provides pet therapy at schools and places such hospitals and nursing homes.

During the quarantine, Thor provided virtual comfort to Klink’s students around the transition to online learning. He even had his own Google Classroom dedicated to funny photos of his life, and participated in Zoom therapy sessions with Klink’s students.

Klink said she entered Thor into the WDHA Ultimate Rock Dog contest because he exemplifies a motivating story of triumph over failure.

“I could write a book on how much joy, love, and purpose Thor has brought to my life,” Klink said. “From the moment he was placed in my arms at seven weeks old and from watching him in his early days of training, I knew he was a special dog. Thor was the dog that made my dreams into a reality.”