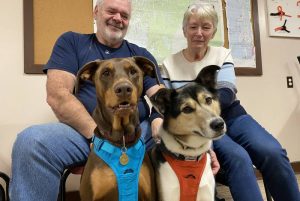 Caught in the undergrowth by the twisted web of the harness he was wearing, Damien, a three-year-old husky cross, could only wait in the chilly rainfall for searchers to find him.
Bruce and Linda Rolfe in Yarmouth immediately started searching for their dog on Dec. 11, after their neighbour returned without him.

The neighbour had kindly volunteered to walk both of their dogs – Magnum and Damien – as Bruce had injured his knee and was waiting for an operation.
The dogs were wearing new harnesses with a connector. The neighbour took the dogs behind the hospital where they could romp off leash but when Magnum stopped suddenly, Damien continued forward, pulling Magnum’s leash and harness over his head. Damien took off wearing his harness with Magnum’s gear slapping beside him.  His owners began searching and didn’t stop until 1:30 a.m. They returned home and put Damien’s bed outside for a familiar scent.

The couple were up several times through the night, checking out the front door for their boy. At 6 a.m. they resumed searching, extending the area to around Caie Crescent.
Searching is a familiar activity for Bruce, the safety officer for Yarmouth County Search & Rescue (YCGSR).  His past also includes service in Yugoslavia in 1995 (UN mission) and Bosnia-Herzegovenia (NATO mission) in 2001. As did others, he developed PTSD. Memories of his time overseas continued to haunt him years afterwards. His dogs are a huge comfort in rough times. No matter where he is, he knows he has their company. Damien and Magnum will sometimes accompany him in a sidecar on his motorcycle. He also has tattoos of them on his arm. “They’re in my heart so I might as well have them on my skin too,” he says with a smile.
On Dec. 12, YCGSR training director Wayne Zwicker stopped at the family’s home.

“Next thing you know, he’s out there with his kids, searching and then Corey Burke, the YCGSR president, and others joined in,” Bruce says.
The searchers continued to expand their area to Lakeside, Overton, and Grove roads.

Later that day, Bruce received a message of a mock YCGSR search on Sunday, Dec. 13 at 10 a.m., with vehicles setting up at R&D Harris Excavating parking lot on the Main Shore Road. Preoccupied, he filed it away in his thoughts as he and Linda continued to search, until around 9 or 10 p.m. that Saturday night.

The couple was up at 6 a.m. the next day and went to check a swamp on the Grove Road. Around 8:30 a.m. they went to grab a bite to eat. Bruce decided he wouldn’t have time to attend the mock search. He sent a message saying he wouldn’t be able to make it as he was still searching for his dog.

“This is for your dog,” he was told – his voice breaking as he tells the story. He told them he’d be there in 10 minutes.

The YCGSR co-ordinator sent out three teams to check the roads. Corey Burke and Al Killam headed down the Grove Road on the north side and along the river in the cold drizzle and fog. Another team went south from the helicopter pad behind the hospital.
Finally … a call. “Wayne says, ‘Come here. We found your dog,’” says Bruce, overcome with emotion. Burke and Killam were with Damien.

“It was a nasty tangled jungle between the Grove Road and the hospital, down in the swamp where there was lots of deadfall,” says Burke of the location. There was a family of chickens clucking nearby and a dog on a hill was barking.

“We got closer and I called his name and he barked. He seemed right close. We picked our way through these little deer trails and saw him. He was tangled so tight he couldn’t even lay down. He was just sitting right there,” he says.

The place had been searched previously on Friday night and Saturday. Damien had gotten himself twisted so badly he couldn’t even lick his paw. When it rained the Saturday night, all the water he could drink was what he could lick off the branches next to him.

“He was parched and tired and sore. He had tried to remove the harness and twisted himself so badly, it scraped all the hair off his leg,” says Bruce.

Back home, the mud-caked Damien wasn’t too impressed with getting a bath. He received a clean bill of health after being taken to the vet to check his leg.

Bruce says he was “really quiet and really tired,” and he doesn’t think Damien slept for the 36 hours he was gone.

Zwicker is glad the mock search had rewarding results.

The hospital area is one that the team is often called out to search annually, because of the hospital patients who wander.

“The members were due for a training exercise anyway. What’s normally done for a search is a dummy is placed in the woods someplace. Then a grid pattern search is conducted. Damien was our dummy,” he says. “In this particular case we were able to bring him home and bring Christmas back to the family.”

The couple is grateful to those who spent so much time looking for their dog.

“We were surprised at how many people helped, without us even asking,” says Bruce. “It really pulled the heartstrings.”