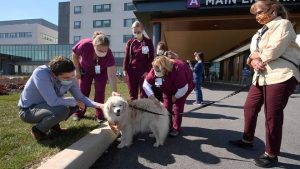 It was a long, boring spring and summer for the four-footed members of the Alliance of Therapy Dogs, who couldn’t visit nursing homes and hospitals giving tail wags and doggy smiles.

The coronavirus paused the professional canine therapeutic interactions with patients and hospital workers.

“You could actually see him falling into a depression at home,” said Wendy Kadish of York Township, describing her 8-year-old Rottweiler named Roman, who was unable to do his “job” as the pandemic wore on.

On Tuesday, Roman stood at the end of a long-stretched leash, absorbing delighted squeals and scratches from several hospital workers as Kadish talked about the days he couldn’t visit patients.The Alliance of Therapy Dogs was visiting UPMC Memorial in West Manchester Township for a pet parade on the sidewalks. Pet therapy has been suspended at the campus during the pandemic. The parade was a chance for hospital workers to take a break with 12 furry visitors.

“Our patients and staff miss having you guys and the pet therapy you give, the stress reduction for the staff, even for the patients when they are going through difficult times. We miss having you,” Joe Iandolo, hospital vice president of operations, told the group gathered.

For many of the dogs this was their first day back on the job in months.