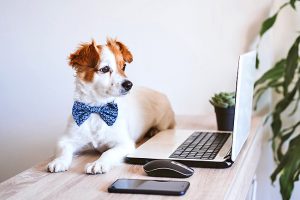 “And I think to myself, what a wonderful world,” Nicholas, six, read from the illustrated book version of the song, as he does each week during his “Read to a PAL Therapy Dog!” session.

The Washington-based nonprofit group called People. Animals. Love. has switched its in-person meetups to virtual sessions during the pandemic to serve hundreds of kids per month who are practising reading.

JP the pooch slept through much of Nicholas’s reading of both “What a Wonderful World” and “Good Night Washington, DC.”

No hard feelings. They’re judgment-free sessions, so dog naps are okay. And if new readers want to strut their stuff – or even if they struggle with some words – that’s all right, too.
“He’s really proud that he can read,” said Nicholas’s mother, Alissa Gaiani. “It’s really given him a platform to show that off a bit.”

PAL coordinates about 500 individually owned dogs and a few cats to provide comfort to people in places such as care facilities, libraries and prisons. During the pandemic, the young readers programme moved online to keep the service going.

“He’s enjoying meeting the different types of dogs, and he gets excited when he recognises a name,” said Gaiani, 41.

“He’s just been happy to read to someone other than his parents. It’s been a really good outlet for that.” The Zoom sessions are also helping Nicholas, a kindergartner at Burning Tree Elementary School in Bethesda, cope with isolation.

“In the beginning, the kids were excited to be home. . . . Now, some of that excitement has worn off,” she said. “He misses his friends. This is something for him to look forward to – something different in his daily routine.”

The children’s programme usually takes place at Washington-area libraries, where kids read aloud to and pet dogs in groups.

Now PAL hosts two 30-minute sessions three days a week – and sessions book up fast. During the sessions, two groups of six or seven kids – generally ages five to 10 – sign onto the Zoom. Each child is paired with a dog and its volunteer owner/handler. After an introduction with other participants and an emcee, each pair goes into a virtual breakout room for a session that lasts about 12 minutes. After that, kids go into a session with another dog.

Kids pick a favourite book and read it to the dogs, while turning around the books to show the dogs the page illustrations.

At the end of the session, the handlers wiggle their dogs’ paws as a farewell wave.

“I think it’s not just the dog. There’s a caring adult with the dog who is eager to listen to a child … and that feels good for a child,” Haworth said. “A lot of the kids take the assignment of reading to a therapy dog very seriously.”

Fiona Lassiter, JP’s handler, who lives in Alexandria, jokes that the dog – whose name stands for Jersey Prince – is a horrible worker, because he sleeps on the job. Actually, JP isn’t snoozing because he is bored. The three-year-old Maltese-and-Poodle mix loves attention.

“It’s a soothing thing for him,” said Lassiter, 42, who has been working from home in her job for US Citizenship and Immigration Services.

Jennifer Adams of Ashburn, Va, said her therapy dog Skylos, a big male black Labrador, loves the attention he gets at in-person sessions. Skylos, who is 15, has been a therapy dog since he was about two. He also gets sleepy during Zooms.

She said she enjoys the virtual therapy sessions and the distraction of having “a few moments of quiet and not have to worry about everything that’s going on.”

Although the PAL programme is based in the Washington area, the virtual program has participants from outside the region. Heidi Guevin of Colchester, Vt, signed up her son after hearing about it from her sister, a former Washington-area resident.

In a recent Zoom, Nathan Guevin Burch, nine, sat in a rocking chair and read to Skylos from a graphic novel in the Big Nate series by Lincoln Peirce.

“You know, the word gullible isn’t in the dictionary!” Nathan read.

Guevin thought her son might grow bored with the virtual sessions, but that hasn’t happened. “Every week, he loves doing it,” said Guevin, 41. “He will drop whatever he’s doing if he is outside playing.”

Another kid reader, Pax Lukanic, nine, sat on a couch with his ear buds as he smiled and read The Terrible Two to a dog named Winnie. Pax has done several online sessions in recent weeks, and it fulfills his elementary school’s virtual homework assignment of reading 30 minutes a day.

Pax was reluctant to read after being online all day during quarantine – until he had the opportunity to “read to the doggies,” said his mom, Jennifer Logun.

“Then it became so easy and effortless,” said Logun, 48, who left her New York City home with her husband and their three kids during the pandemic and moved into her parents’ house in Bethesda.

“He’s excited to read to the dogs,” she said. “Thirty minutes go by in a flash, then homework gets done.”

As for Winnie, the six-year-old Maltese-Shih Tzu mix typically snoozes through the online sessions – but that is no different from the in-person sessions, and it is part of Winnie’s charm, said handler Margie Tommer, 57, of Bethesda.

“When we do it in the library, she sleeps the whole time. It’s hysterical,” Tommer said. “For the kids, it’s a calming effect. … They literally will sit there and pet her the whole time while they read.”