Pets in prison for pawsitive change 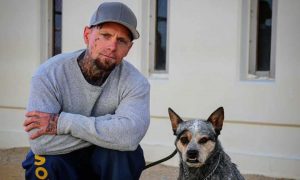 On an idyllic sun-drenched day in California, I find myself in jail. But unlike the 5,000 or so inmates of North Kern State Prison, located 150 miles north of Los Angeles, I’m here voluntarily, accompanied by Zach Skow, a man on a mission to bring dogs into every US prison.

Skow is the founder of Pawsitive Change, a rehabilitation programme that pairs rescue dogs with inmates. He began a pilot programme at California City Correctional Facility in January 2016, teaching inmates to become dog trainers, and it’s now been rolled out to four more California state prisons and one female juvenile correction centre.

To date more than 300 men have graduated from the programme and roughly 200 dogs from “high-kill” shelters have been rescued and adopted as a result of the inmates’ work with them (the shelters accept any animal, regardless of age or circumstance, but they do euthanise a certain percentage if they can’t rehome them). Seventeen of the programme’s human graduates have been paroled and so far none has returned to prison (at a time when the US recidivism rate stands at 43%). The majority of the dogs they trained have been awarded the Canine Good Citizen certification in recognition of good behaviour and obedience. Two of the canine graduates have been certified as therapy dogs and several others are in training to be service dogs for military veterans.

I join in the second week of the 14-week course at North Kern, together with two dozen inmate students, head trainer Robert Villaneda and Skow. I’ve been in some form of education my whole life – school, university, drama school, therapist training college – but what I witness in terms of student engagement is unprecedented. In every classroom I’ve ever sat in, there’s been a healthy proportion of students checking their phone, looking out the window, chatting or grabbing a few winks. At North Kern, however, the students are totally engaged, taking copious notes, asking questions and sharing knowledge.

To have made it on to the course, they have each submitted essays on what they’d bring to the programme and why they want to do it. The only inmates excluded are those who have been convicted of violence against animals or sexual assault.

While Villaneda leads the session, he frequently hands over to the programme mentors: men who’ve already completed the course several times. In terms of attentiveness to their canine charges, the students would put any dedicated helicopter parent to shame. They give detailed accounts of bowel movements; how one dog won’t eat in front of other people; how another won’t go to the toilet until all the others have gone first. Skow explains that a core part of the programme involves the students (he never refers to them as “inmates”, rather “trainers” or “rescuers”) being aware of and identifying their own emotional states at any given time. “Animals don’t follow unbalanced energy,” he says, “so we need the guys to be able to recognise if they’re off their centre and, crucially, how to get themselves on a level again.”

Skow’s motivation to start Pawsitive Change is rooted in his own recovery from alcohol addiction. In 2008 he was diagnosed with acute liver disease and given six months to live if he didn’t stop drinking. A dog lover from a young age, he credits his recovery to the fact he didn’t want to abandon his dogs. After the wake-up call of his diagnosis he gave up alcohol and went on to set up a dog-rescue service, Marley’s Mutts, which is based in Kern County and rescues dogs from shelters and troubled regions of the world. His interest in working with incarcerated people sprung from his AA meetings where his sponsor would relate stories of running meetings inside the prison system. Skow’s interest was piqued: with hundreds of abandoned “mutts” in his own rescue facility, he wondered if he could bring the healing power of dogs to the prison system.

As I watch the men go through their paces with their dogs, I am immediately impressed. Working with the dogs and seeing what the animals are going through prompts the men to speak of their own experiences. When one student relates how his dog didn’t want to come out of the kennel in the first few days, another shares how he too didn’t want to leave his cell when he first came to prison. As a therapist, I found the Pawsitive Change students’ level of emotional literacy and ability to be vulnerable staggering.Two themes that repeatedly come up in my conversations with the students are trust and responsibility. Many of these men have been told repeatedly from a young age that they’re not to be trusted, that they make a mess of things, that they’re not fit to take charge of anything. This message is then reinforced as they progress through the penal system. If I’ve learned one thing while working as a psychotherapist, it’s that what we’re told we’ll become, we’ll become. This programme challenges the “branding” these men have had imposed on them from an early age. It allows them to create new narratives.

Very often it seems clear to me why an incarcerated man has chosen the path that has eventually led him to prison. The challenge isn’t so much one of rehabilitation as of rebirth and reparenting. They have to learn they can be trusted and that they can be responsible. Having the experience of people believing in them, learning that they’re innately worthy and, crucially, lovable, are for many of these men new and life-changing concepts.

While working on this article, I hear that Isaac has been paroled. I’m reminded of what he told me when I saw him in prison: “I care a lot about these dogs, because they give me a lot.” Apparently, he impressed the board with how he’d been spending his time, particularly his work on rescuing and rehabilitating dogs. Those dogs may have just given him the biggest gift of all – freedom.