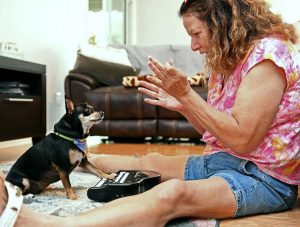 Gloria Taylor, Village of Gilchrist, and her therapy Chihuahua named Angel are not used to being held back. The two spend a good deal of time visiting memory care facilities, rehabilitation centers, and  occasionally, terminally ill patients. Angel also is on Taylor’s church visitation team. Angel has a full calendar and thrives on it. “Some days, she’s working back-to-back on those visits,” Taylor said. “She loves what she does. She was born to do it.” Since assisted living facilities and other senior-living establishments stopped allowing visitors, it’s been a challenge for on-the-go therapy dogs to stay mentally stimulated. But their creative and innovative owners are happy to take on the challenge.

“She’s so used to being on the go all the time,” Taylor said. “The first week was a challenge for her. As time has gone on, she’s gotten more adjusted.”

Angel was a little depressed at first, but Taylor helped her shift from idleness to becoming a student. Taylor calls their learning times together “school,” and right now the two are tackling piano together.

They started with one keyboard that could sit on the floor, but the keys weren’t long enough for Angel’s paws.

“I got her one where the keys are a little longer, just to get her paws on the keys,” she said.

Taylor also is teaching Angel various tricks, but she can tell Angel is ready to get back onto people’s laps and fulfill her calling as a therapy dog.

“She’s a lover,” she said. “I keep telling her soon, soon, soon, we’ll be doing our thing again.”

Maximus the bulldog will be 9 years old in June and is used to his packed schedule as well. He’s been a therapy dog since he was 1, said owner Susan Feinberg, of the Village of Pennecamp.

Maximus is active in the Dynamic Dog Club’s circus and on the Dynamic Dog Drill Team. He’s also the mascot for the Corvettes Village Vettes car club. He also participates in R.E.A.D., Camp Villages and fashion shows.

“We’re still doing some practice for when we start the circus again,” Feinberg said. “He knows how to get on the skateboard. He also does spinning 10 times in a row with the treat in my hand.”

Feinberg makes sure to get Maximus out each day to greet some friends, like his brand new Yorkie friend.

“As much as he loves that we’re home, when you’re a therapy dog and a social dog, you’re used to having that stimulation,” Feinberg said.

Feinberg is proactive in asking those in her dog community about how they feel about getting together, with social distancing, once the recreation centers start opening.

“I’m writing a note out to everyone when this is all over, since we want to try to get a few new members for the group,” she said.

In ordinary times, she said the close-knit group even dances with their dogs to keep them active.

“When I say it’s time to dance, Maximus will run to the car,” she said.

As a therapy dog who visits assisted living facilities and local elementary schools, Maizie likes to dance, too.

While she’s been missing visits with the people at the facilities and the kids at the schools, something the cockapoo does up to three times a day, she’s been keeping her skills fresh and on point with owner Donna Mygrants, of the Village of Sanibel.

Besides dancing, Maizie can ring a service bell on cue, play “dead dog,” where she gets perfectly still, and roll over on demand. She also does math.

At the school one day, the kids were working on their math and asked Mygrants if Maizie could do math, too.

In a quick-thinking maneuver, Mygrants told them Maizie could count to two. She said “one” and held out her hand for Maizie to lay her paw down. Mygrants took her hand away and then put it back, and Maizie put her paw down again, adding the sum.

No doubt Maizie is ready to get back to duty after all of this time rehearsing her crowd-pleasing feats with more than just the Mygrants as her audience.

“She’s still up on those (tricks),” she said, adding, “but I think we’re cramping her style because we’re (the ones she sees) all the time.”